The Dark Souls II retrospective also continues, this time with a discussion of game mechanics more closely associated with the player character.
Read more »
Posted by Sientir at 9:00 AM No comments:

FTL: Faster Than Light is a space crew simulator rogue-like type of game. I started by going through the tutorial, then attempted several runs. None of them ended well, but that's OK. The game is fun, and I expect to play it on the weekends occasionally.

The Importance of Hope - Geekdom of God Ep. 51

Hope is very important! In this episode, I explore why, and also how cynicism can cause us to become hopeless. I also go over, for lack of a less odd sounding phrase, hope hygiene.

The Hope of Christianity: https://youtu.be/4xcSq2MUbrI

Also, I'm going to be taking a hiatus from creating Geekdom of God. I've been making it for about a year now, and I've learned a lot—including that I need to take some time off to refine the creation process. Geekdom of God will return this autumn! (Or spring if you live in the southern hemisphere.)

Note: This hiatus will not be affecting the video game content.

Posted by Sientir at 5:00 AM No comments:

A little while ago, I became curious about how the various zones of the three Dark Souls games connected to each other. I decided to satisfy this curiosity by making these graphs. When reading them, keep in mind that arrows indicate a connection, not just lines. So a line with only one arrow head is one-way only—no backtracking on foot (or via mouth, as the case may be) that way!

Note that bonfire warping is not accounted for. There would be no point in later games, after all. 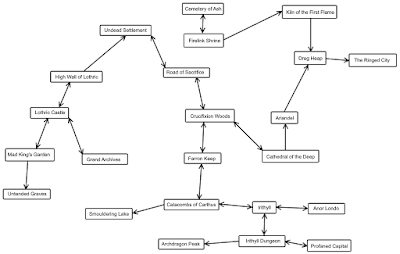 In Hollow Knight this week, I challenge the final boss. Again and again and again. It really gives me a proper what's for!


In the Dark Souls II Retrospective video, I gush over the level aesthetics. I generally avoid talking about the mechanical aspects of the level design, as well as the world design. Those are topics for future episodes. For now, join me in admiring the environment art of this game!
Read more »
Posted by Sientir at 9:00 AM No comments:

Base Building in Subnautica Creative Mode

Subnautica is a cool game of ocean exploration. But it also includes base building! This week, I decided it'd be cool to journey throughout the ocean to build bases in creative mode, which makes building far simpler by removing most of the constraints (such as material costs and durability).

Geekdom of God Ep. 50 - Who does the Bible say is responsible for controlling male sexual desires? Men or Women?


There are many today who claim that women must dress modestly so that men don't sexually mistreat them. In effect, they argue that women must try to control the sexual desires of men.

But what does the Bible say about this topic? Does it reinforce this idea, or does it refute it? Watch this video to find out!

There was enough variety in the content this week that it didn't make sense to me to try to make separate posts, so here's all of it!


The first two videos are from a game called Airscape: The Fall of Gravity. It's a challenging platformer. I ended up deciding to not finish the game, as I wasn't interested in conquering the platforming challenge. I suspect part of the reason was lingering frustration with Hollow Knight's White Palace, even a week removed.

Next comes a trio of Guild Wars 1 videos. To some extent, these are content fillers. That doesn't mean I think they're bad by any means, it simply means they aren't a proper Let's Play series. I'm still in a bit of a limbo, as many of the games I want to start are (as far as I can tell, anyway) longer RPGs, and I want to start playing Bloodstained: Ritual of the Night for the channel the week it comes out (it releases June 18). I also don't want to interrupt a series. This makes figuring out what to do a bit awkward. On the other hand, it has meant I've experimented some!

Next, we have the next part of the Hollow Knight Epilogue. I get to the final boss for the better ending I'm going for, but I'm going to have to actually beat that boss in a future episode, as it proves to be quite challenging!

And finally, the last video is the first in a new series I'm doing that'll be a retrospective on Dark Souls II, the much-maligned middle-child of the Dark Souls trilogy. This episode specifically examines the issues with the game being named "Dark Souls II," and everything that comes with that.
Read more »
Posted by Sientir at 9:00 AM No comments:

In this Geekdom of God episode, I examine the impulse to try to use the law to enforce moral behavior. This requires analyzing how the law works in a general sense, as well as its effectiveness in producing the desired result of eliminating immoral behavior.

I made a LOT more progress in this week's Hollow Knight episode than I was expecting! It starts with the Lost Kin fight, which was significantly easier for me than I expected. This meant I could make my way to the Super Meat Boy inspired White Palace!


The second video is the Guild Wars: Factions mission of Unwaking Waters with the story quests surrounding it. It was a much needed bit of relaxing after the challenge of the Hollow Knight episode!
Read more »
Posted by Sientir at 9:00 AM No comments:

I decided to try an experiment with streaming the weekday recording session. I did this with No Man's Sky. It was a worthy experiment, but I'm not quite happy with the results (in part because it actually created a lot of extra work behind the scenes). That said, I do want to figure out a way to work streaming into what I do in a way that doesn't create a lot of overhead.

No Geekdom of God this week

There won't be a Geekdom of God episode this week. This is due to several factors, but the most important one is this:

My episode idea for this week sounded good when I came up with it, but slowly and surely fell apart as I was writing the script for it. Thankfully, my sister (who has been graciously helping me edit episodes of late) helped me confirm that the script was a hot mess.

This isn't a script that can be fixed, since it was concepted as a list, and a major problem with it is that each topic ended up being both meatier than I had originally thought it would be, as well as not connecting to the list's theme as well as I had thought it would.

The good news is that this problem means that the list topics can be split up into their own episodes that I now have head starts on.

Unfortunately, due to the way the last several days have played out, I did not realize the problem with the topic until I'd effectively run out of time. The reasons for this are connected to a broader issue that I'm going to be discussing with Patrons, so now is a good time to sign up if you're reading this and haven't.

Ultimately, it is my judgment that it is better to not try to rush some sort of episode out—only for it to end up being late anyway, as would be inevitable at this point—because this show is too important to lower the bar of quality simply so I can say that I've gotten something out every week since it started.

Thank you for your understanding.

Email ThisBlogThis!Share to TwitterShare to FacebookShare to Pinterest
Labels: Announcements

I ended up recording another two episodes of Hollow Knight this week. Unfortunately, something was off with my microphone settings, which resulted in it being too quiet and cutting out in spots. This isn't helped by the fact that the game was way too loud. That's something I'll have to fix for the next time.

Anyway, I went after the last two spirit warriors I'd previously missed, then took a stab at beating the White Defender. He proved...challenging.

In the Sunday video, I return to Guild Wars 1 and doing stuff on my Ranger, this time the Gyala Hatchery mission, though the episode itself starts with the prerequisite quest wherein I retrieve a chest of turtle eggs.